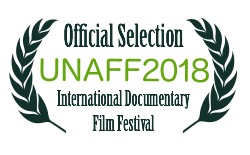 THE WHALE HOUSE  film was screened Thursday, October 25th at 8:30pm at Stanford University- Anderson Collection , Palo Alto, California, preceded by a panel at the same location at 6:15pm titled “Gender, Race, Religion and Politics in Popular Culture”.
The UNAFF is the older documentary festival in the US and over 37 films have received Oscars nominations and Academy Awards. After this presentation, the film will travel to over 60 cities around the world. TORONTO, CANADA, – TERRA INCOGNITA PRODUCTIONS and the PORTLAND FILM FESTIVAL in Portland, Oregon, are proud to announce the screening of THE WHALE HOUSE, a new feature documentary film by Margarita Ramon.

“Even if the proud Tlingit of Alaska were finally forced to surrender when the US Army bombarded their villages, the Natives may have ultimately won the war. One hundred and fifty years later, Native Peoples along the Pacific Northwest coast of Alaska & Canada are experiencing an unprecedented artistic Renaissance”.