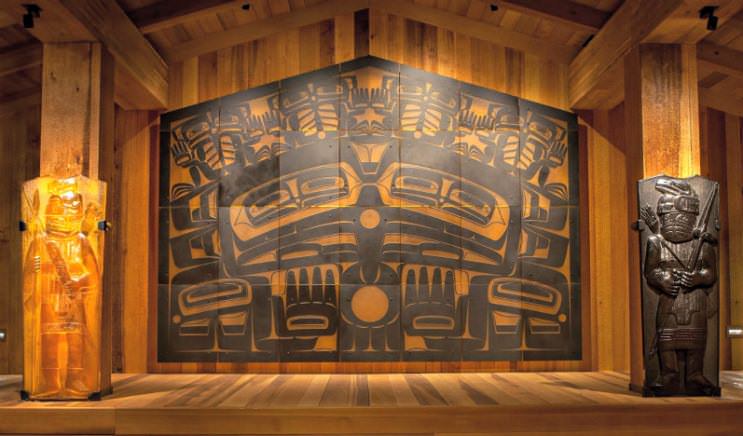 The art of Preston Singletary has become synonymous with the relationship between European glass blowing traditions and Northwest Native art. His artworks feature themes of transformation, animal spirits and shamanism through elegant blown glass forms and mystical sand-carved Tlingit designs.

Singletary learned the art of glass blowing by working with artists in the Seattle area, including Benjamin Moore and Dante Marioni. As a student and an assistant, he initially focused on mastering the techniques of the European tradition. His work took him to Kosta Boda (Sweden), where he studied Scandinavian design and met his future wife. Throughout his 30+ years of glass blowing experience, he has also had opportunities to learn the secrets of the Venetian glass masters by working with Italian legends Lino Tagliapietra, Cecco Ongaro and Pino Signoretto. In 2010, he was awarded an honorary Doctor of Arts degree from the University of Puget Sound.

Singletary maintains an active schedule by teaching, lecturing and exhibiting internationally. In 2009, the Museum of Glass in Tacoma, Washington, launched a major mid-career survey of his work entitled “Preston Singletary: Echoes, Fire, and Shadows.” In 2018,  he will launch a new travelling exhibition with the Museum of Glass entitled “Raven and the Box of Daylight,” which will push the boundaries of glass as a medium for storytelling. Photographs and artistic expressions in neon and mixed media for the last 29 years.

Represents the sculpture of his father, John Edward Svenson.

Instructor in wood sculpture and neon art at the Academy of Art University, San Francisco, since 1995.

Serves on the Board of Trustees for the Museum of Neon.